With the Australian Government’s commitment to net-zero carbon emissions by 2050, the study shows how continuing to develop low emission technologies -  like the Allam Cycle - is critical to reaching a clean energy future.

“This technology’s use at scale would introduce on demand and near-zero emission hydrocarbon and biomass power for Australia - complementing renewables’ role in the energy mix - and can also produce clean hydrogen and ammonia,” said LETA Chief Executive Officer, Mark McCallum.

The study found one of Australia’s biggest potential contributions to global decarbonisation is as a global exporter of net-zero energy products.

“Australia’s thermal coal exports would be equivalent to 17.5 million tonnes of clean hydrogen, which could increase annual export revenues for Australia by 71% ... with a potential export value of $35 billion,” the report revealed.

Locating an Allam Cycle plant near carbon storage sites in Queensland could produce clean hydrogen at or below the government’s $2 per kilogram target. The study also found that a plant could produce clean electricity to firm renewable generation domestically.

In a world-first, an Allam Cycle combustor project in Texas delivered electricity to the main grid in a major milestone for the technology. The breakthrough is a key step in the commercialisation of the revolutionary technology. 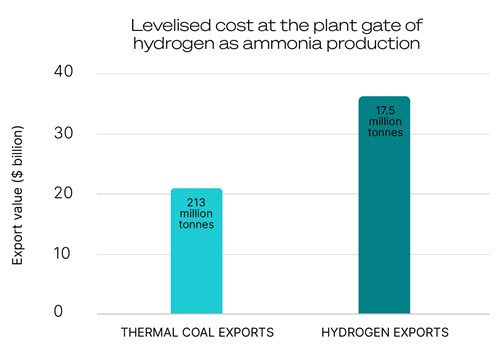 In the transition to a low carbon economy, the Allam Cycle can help create zero-emissions industries such as hydrogen and fertiliser using carbon capture utilisation and storage. In doing so, the technology can pave the way for new technology jobs. The COAG Energy Council forecast that within 30 years, the hydrogen industry alone could generate about 8,000 jobs.

How the Allam Cycle works

Traditional power plants use steam, produced by burning fossil fuels mixed with air to spin turbines. But the Allam Cycle uses fluid CO2 created by burning fuel with pure oxygen, to turn turbines and produce near-zero emission power. The Allam Cycle has the potential to produce electricity at a lower cost than conventional fossil fuel generation and can also produce clean hydrogen and ammonia.

The by-products of the revolutionary technology are CO2 and water. Working as a closed loop, the carbon dioxide can be reused to produce more power, captured and stored safely or used by other industries.

Australia is already one of the top three exporters of hydrogen to Asia. And by 2030, demand for hydrogen is expected to top 3 million tonnes in Japan, South Korea and China alone. The feasibility study identified the opportunity for high quality Australian coal to be a net-zero resource exported around the globe as hydrogen and ammonia.

“Aside from the domestic application, the Allam Cycle can unlock lucrative new, clean industries and assist our regional trading partners - for example, Korea, Japan and Singapore - meet their own emissions reduction aspirations and energy needs,” Mr McCallum said.

The feasibility study, by US infrastructure solution group 8 Rivers Capital, complements the Allam Cycle Zero Emission Syngas Combustor Project currently underway in Florida. The project is a co-investment between LETA and the US Department of Energy.

Following the study the next step is to secure investment for engineering, design and siting studies for Allam Cycle plant development with a plant-scaled facility possible by the mid-2020s.

Sign up to get our latest projects straight to your inbox